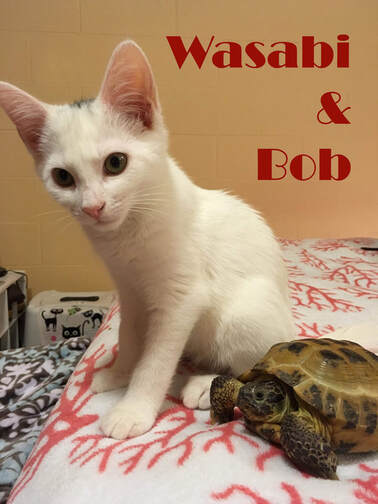 A tale of unlikely friends – shells and fur – begins with Bob, the tortoise, and Wasabi, the cat. Jodi previously had a dog named Emmett, who passed away in 2013, and later she rescued Bob, the tortoise in 2015. She shared that her whole life people have re-homed their pets with her family since they were so giving and loved all animals. So, Jodi is no stranger to a menagerie of pets! So, in 2016, Jodi Neil was on the search for another companion to add to her life, beginning that search online, but had a frustrating time trying to find the perfect match. She wasn’t sure if she was ready to bring another dog into her life, but after consulting with her sister, she saw a listing for several kittens at Juneau Animal Rescue (then Gastineau Humane Society). There had been an influx of kittens from a hoarding situation, and her sister felt that it was meant to be.

Originally Jodi was looking to visit Chief Hopper, an orange and white kitten, whom she had seen on the Juneau Animal Rescue website. Though he wasn’t the kitten for Jodi, he was lucky enough to find a home with Jodi’s cousin’s family. Around that time, Wasabi had come in with two brothers, Sushi and Ginger, and Wasabi was the runt of the litter. He had to be nursed by JAR’s vet tech, Alicia, as he wasn’t able to compete with the other kittens. He is a stunning creamy white with a light grey tuft on his head, which reminded Jodi of her previous cat, Bob (not to be confused with Jodi’s tortoise, Bob). Weighing in at only 2lbs, sitting alone in the corner, Jodi found Wasabi had a very cuddly and friendly personality, which sucked Jodi right in. Jodi’s sister had a strong emotional reaction to seeing Wasabi and a gut feeling. It was fate and Wasabi joined the Neil family soon after.

Wasabi is very curious about Jodi and is very engaged in what she’s doing. He loves to follow her, enjoys the occasional ice cream cone with her, and likes to respond to her by chirping. However, he’s very independent, and does not like to be cuddled or nest, but he behaves more like a playful puppy, silly and mischievous. Jodi expected a cat would like to snuggle and curl up, but he’s a very quirky guy who doesn’t like blankets, but instead prefers the turtle huts like his tortoise brother, Bob. Wasabi’s hobbies include Snapchat, snoozing under the heat lamp, and tormenting his brother. Bob and Wasabi chase each other around the house trying to nip each other, but you can also find them cuddling together in a warm sunny spot. He’s a strictly indoor kitty that loves to watch birds and protect Jodi and the household from bears with this ferocious growl.

Wasabi has taught Jodi the importance of adoption and has provided wonderful companionship and an outlet for Jodi’s attention, love, and affection. She’s enjoyed countless hours watching Wasabi and Bob interact, play, cuddle, and become unlikely friends. Jodi feels the adoption process was very easy and worth it, as Wasabi has really made her family feel complete. To give back to JAR, Jodi has volunteered in the reading to cats program, has participated in the Run Fur Fun, donated supplies, and is a proud supporter of JAR and other animal rescues.