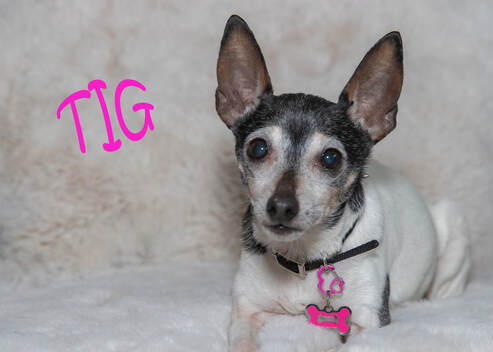 Tig's "Glamour Shot".
You never know what day you might wake up and find your life about to irrevocably change.   After years of living with the same family, Tink—a 10-year-old purebred fox terrier—would have not just one but two such life-changing days in the fall of 2019.  This is her story.

The morning started off like any other, but this would be the day Tink’s family chose to relinquish her to Juneau Animal Rescue (JAR).  They reported she had a urinary tract infection and couldn’t afford her medical care. Imagine Tink’s confusion--an elderly animal who suddenly found herself in a strange place, surrounded by people she didn’t know.  There is also no way staff at the shelter can explain what is happening to the animals left there.  All they can do is treat them with kindness and care for them until, hopefully, they are adopted.

Tink was evaluated by staff and also seen by a veterinarian.  She did frequently urinate, and the vet suspected that more than just an infection was involved.  Further testing determined that Tink likely had transitional cell carcinoma—a type of bladder cancer that is difficult to treat with any success.  Staff knew they would need a special person if Tink were ever to find a new home.

Luckily there are people in the world like Maren.  She already had two dogs—Wilco, an 11.5-year-old lab, and Luna, a high energy 4.5-year-old terrier mix—and she wasn’t really looking for another dog.  But Maren loves canines and has a dog-friendly home.  As such, Maren had already advised JAR staff that she would consider adopting an older, harder-to-place dog, should one come in, to provide it love and an attentive home for as long as it lived.

JAR staff told Maren about Tink’s circumstances, and Maren was definitely interested.  After serious consideration, she took the next step and brought her two dogs to the shelter to meet Tink to see if all the animals could get along.  According to Maren, Luna was shy, and Tink snapped at Wilco’s lip when he tried to lick her, but all in all, it went ok.

Which leads us to the second life-changing day for Tink—the day in October when Maren brought her home!  One of the first things to change was her name.  Maren was clear that she wanted Tink to feel strong in her new home and for her to have lots of new and positive experiences.  She was looking around for a name, and discovered the Norwegian word “mektig,” which means “powerful and mighty.”  Maren chose that word for her name and shortened it to “Tig.”

Once Tig was in her new home, as to be expected, there were a few adjustment issues, especially as the three dogs began to meld their lives.  Wilco was mostly indifferent, but Maren said that Luna kept trying to “herd” Tig.  Also, if Tig was getting extra attention from Maren, Luna would try to insert herself to get her fair share.  With just a little time, however, things seem to have worked out.  Occasionally, Maren has caught Luna and Tig sleeping together, side-by-side, when they thought Maren wasn’t looking.

Maren says that Tig is silly and wiggly—she likes to snort and roll.  She is also very playful for an older dog and doesn’t act ill.  Tig does have the “fierce” terrier attitude, but only up to a point—she likes to stay close to Maren, both on the trail and in her lap at home.

Although she is a little dog, Tig likes to run and be outside.  One of her regular walking places is the Brotherhood Bridge trail.  Because Tig has a short coat and is only 6 pounds, Maren made sure that she has a variety of dog coats to wear to stay warm on their outside adventures.  Maren suspects that Tig was primarily an inside dog in her prior life and really didn’t get to spend much time outdoors.  Now fully geared up, Tig is able to experience the wonders of being outside, regardless of the weather. Tig will even get to experience cross-country skiing for the first time this winter!

So what does the future hold?  For the most part, adjusting to her new home has gone well.  Although Tig urinates frequently, Maren has readily made accommodations around that.  After a little trial and error, she has discovered that keeping Tig in a large kennel while she is at work is the best solution.  Tig has a blanket to curl up in and a place to pee any time she needs, and Maren has peace of mind not worrying about her.  Maren reports that she washes dog blankets every day.  She also has doggie diapers around, if needed.

The best news of all is that Tig seems to feel just fine.  The vets have advised Maren, however, that circumstance could potentially change very suddenly, especially if Tig is suddenly no longer able to urinate.   In that case, euthanasia would really be the only viable choice.  Maren only wants what is best for Tig, and being informed about possible likely outcomes is part of being a responsible pet owner.
​
For now and for the rest of Tig’s life, she has a loving home. Maren says she “adores” Tig and that Tig has really blossomed since being adopted.  Maren clearly had room in her home and her heart for another dog, and she gladly invests the time and resources to manage three different dogs with three different energy levels. As Maren says, adopting an older animal may mean you are also adopting some health issues, but she also stresses that you get companionship and love, and a way to make an animal’s final years some of their very best.
​
“Compassion is invincible”