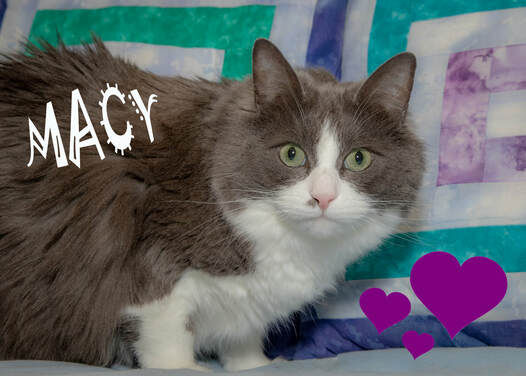 This is a story about Macy—a troubled cat who needed a special human who would give her another lease on life.  In the spring of 2018, things were not looking good for Macy — an adult gray-and-white female cat, who had been at Juneau Animal Rescue (JAR) for over 6 months.  A spirited cat when she came in, she simply was not doing well in the shelter environment.  In short, Macy didn’t like other cats, so she had to be kept in a separate cage and, understandably, the longer she was confined in the cage, the feistier and less friendly she became.

Although she was just a young adult, Macy already had a complicated history.  She originally arrived at the shelter as a stray in June of 2014. After no one came to claim her, she was adopted out to her first family and spent the next several months with them. Unfortunately, the family had to move and said they couldn’t take Macy with them, so they brought her back to JAR.  Macy was then adopted out again a few weeks later and spent the next 3 years with her second family. Sadly, they too ended up moving and couldn’t take Macy with them.  So here she was back at JAR and she was not happy.  Staff wondered, “Who is going to adopt a grumpy reactive cat?”

To help find that person who would give Macy a chance, JAR put out a special appeal which advised, “Not all cats are born to be snugglers, and some are feistier than others.  Macy is one of those cats. She needs a home and family that is patient, with no other cats or children, who is willing to put up with her tendency to hiss and swat.  Do you have what it takes to provide a home for this special needs cat?”

Beth has always loved cats.  She adopted a brother and sister pair when she first arrived in Juneau, and Alexander and Icy both lived long and happy lives.  They had both passed a number of years ago.  She also shared a wonderful shelter dog, Maya, with her adopted family for 15 years. Maya had also recently passed, and Beth was really missing animal companionship.  Beth had thought about getting a new feline friend, but she travels a lot and didn’t think it would be fair to a new cat so had resisted thus far.

As fate would have it, Beth saw Macy’s special appeal last spring and was moved by her story.  She thought she’d at least go to JAR to meet her.  True to her nature, during their first “meet and greet,” Macy was standoffish and scratched and nibbled on Beth.  Not an auspicious beginning.  Undeterred, Beth felt compelled to give Macy another chance at a good life, so applied to adopt her. Beth said, “Macy was a mess.  She clearly needed help and needed someone to love her.”

A week later, Macy was on her way to Beth’s home.  Immediately when they got there, Macy jumped out of her carrier, sniffed around the house, then jumped on Beth’s lap and started purring.  Beth had instant confirmation that she had made the right decision.  That is not to say that Macy’s feistiness instantly disappeared-- she continued to hiss and swat but, over time, these behaviors became more playful instead of originating from a place of fear.

Interestingly, although Macy had lived on the streets as a stray for at least part of her life, when she arrived at Beth’s home, she initially showed no interest in going outside.  She was perfectly content to sit and look out the windows.  Beth realized that Macy had been living in a windowless cage for months, so just being able to see the outside world was a real upgrade for her.

Now nearing almost a year with Beth, Macy is one happy girl.  Today Beth describes Macy as “a sweetheart with a feisty side to her.”  Macy loves to sit on Beth’s lap and sleep on her bed at night.  She is playful and enjoys her inside toys and interacting with Beth.

She also loves to go outside.  Beth’s neighbors report that Macy can be a bit of a bully with other neighborhood cats, but apparently she is making friends with a nearby Doberman named Evie.  Evie and Macy have been spotted touching noses with each other.

Macy has also proven to be a good mouser.  One morning Beth awoke to a scuffle downstairs.  She went down to investigate, and Macy had cornered a mouse.  Beth very much appreciates Macy’s innate talent.

Beth says she is still amazed how quickly Macy’s personality changed for the better when she had a home of her own.  Macy is sweet but spunky, and she fit right in to her new environment.  Beth also enjoys having an animal around again.  And although Beth still travels, when she returns, Macy seems excited to see her.

Beth’s advice to others considering adopting is simple, “Take a chance on one of the animals that is struggling.”  Macy had been through a lot of changes in her short life, and Beth knew that every animal deserves another chance.  She suspected Macy was just reactive and scared in the shelter environment, and it made her happy knowing she could change that.

The staff at JAR always root for the underdog or, in this case, the “undercat,” and they never give up trying to find every animal a home.  In addition, the community is a better place because of people like Beth who are willing to open their hearts and their homes to an animal in need.
​