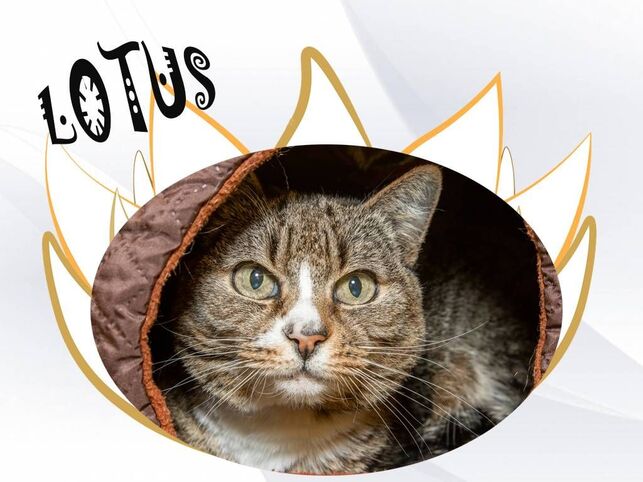 Happy home!
Once upon a time in a rainforest, three small black and brown tabby kittens were born. Because they were born in a secret place and weren’t discovered until they were fully grown, their mother and their other litter-mates, if any, are unknown and lost to the past. Fate was kinder to the kittens--Lotus, Carmine and Myrtle -- and somehow they survived to grow to be adult cats, even though they were living wild.

By some means, the cats ended up in a place called Switzer Creek and found a way there to eke out a life on the streets. The outside world is a dangerous place to live when you are a homeless cat—lack of food, cold
weather, and dangers from many places-- but together the three sisters managed to survive.

One day, a kind-hearted man who lived there learned of these cats and decided to make their lives better. He started by feeding them, and eventually got them spayed and invited them into his home. The situation wasn’t ideal, however, as there were lots of other homeless cats in the area, who would also enter his home and there was never enough to go around.

Life was somewhat better and more predictable for Lotus, Carmine and Myrtle until the summer of 2019, when their caregiver had to move south and couldn’t take them with him. He called Animal Control and requested assistance in catching the cats so they could be relinquished to Juneau Animal Rescue (JAR). By now the cats were 14 years old. Staff knew it would be challenging to find homes for these shy, senior cats, especially when they had lots of other cats currently available for adoption.

Senior animals sometimes come with health issues. Carmine recently had some dental work and Myrtle had a heart murmur. Lotus was the healthiest of the three. The three sisters were cleaned up, given checkups, and made available for adoption.

Much to everyone’s surprise, less than two weeks later, a kind family submitted an application to adopt two of the three cats! Honestly, they said they wanted to adopt all three but, unfortunately, they lived in a place that allowed only two animals. Since Carmine and Myrtle had some health issues, the family kindly adopted them, thinking that Lotus would have an easier time finding a good home. It was a good plan, but Lotus would not be so lucky.

Although people came to visit and ask about her, Lotus is shy and is usually curled up, hidden in her cat cave—her favorite place in the shelter environment. Because she is quiet and gentle, she often got overlooked. Summer became fall, then fall became winter. The months continued to pass by and Lotus continued to patiently wait.

Suddenly, it was January 2020 and, with the New Year, it looked like Lotus’s luck had changed. A family with another female cat said they wanted to adopt her! Everyone was thrilled, as it seemed like such a perfect match!

Unfortunately, life isn’t always perfect, and in less than two weeks, Lotus found herself back at the shelter. Even though she lived compatibly with her sisters for many years, Lotus and the family’s other female cat didn’t seem to get along. Although it wasn’t Lotus’s fault, the family thought it was best to return her. Sometimes it takes more than a few weeks to integrate a new cat into a home with other cats. Nevertheless, staff now recommend that Lotus would likely do best in a home without other felines.

As of this writing, Lotus is still patiently waiting at the shelter. She knows that wishes are granted in fairy tales, and hopes that someday someone will adopt her so she can find her “happily ever after.” Might you be the person who can make all her dreams come true? Please help us to write the rest of Lotus’s “Happy Tails” story—a story that includes the end of her time at the shelter and the beginning of the rest of her life in a home that has love to share with a sweet older cat!