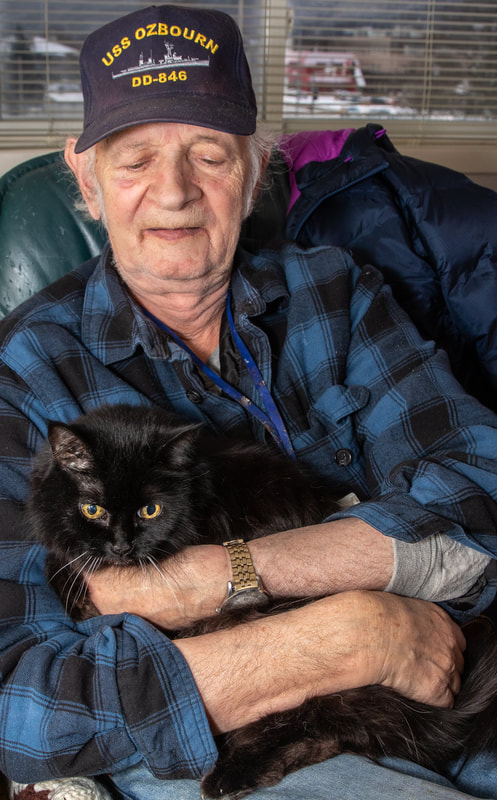 Happy home!
They say “you don’t choose the cat, the cat chooses you!”  In the mysterious world of felines, we’ll never know for sure how relationships evolve, but if you’ve ever had a cat in your life, you know that a cat is both a friend and an equal.  Cats will exert their preferences on your relationship.

From the time he was a young boy, Steve always had cats in his life and, interestingly, most of them were black cats.  Some cats “chose” him; others he selected—but he has loved them all.  In 2016, Steve was living in a float home in Elfin Cove with his black cat Sinbad.  Life was good for both of them until Sinbad died unexpectedly of a heart ailment.  Steve said it broke his heart to lose his beloved cat.  In his 70s, Steve also had some health issues and, as much as he loved cats, he debated whether he should get another at his age.  He thought about it for four or five months and then decided he’d at least take a look at Juneau Animal Rescue (JAR.)

In 2017, on a trip to Juneau, he stopped by the shelter to see the cats. He looked at several, and talked to staff, and then left to think about it for a bit.  A short time later, he called JAR and told the staff he was ready to adopt but was uncertain which cat.  One of the staff told Steve he thought Cleo would be a perfect match.

Cleo was a 10-year-old black cat that had been at the shelter a few months.  Over the years, she had already had a couple of families and was in need of a forever home.  Being senior and black meant that she would be harder to place. Cleo was one of the cats Steve was considering, so he went with the staff’s recommendation.  Since Steve was also a senior, he was able to adopt Cleo without any fees, thanks to JAR’s “Seniors for Seniors” program.

So off Steve and Cleo went to Elfin Cove.  For the first two weeks, Cleo was very shy and hid.  She only came out at night to eat and then hid again.  Steve knew that going from the shelter environment to a float home might be a little scary for her.  He suspected she also still smelled Sinbad on the boat, which may have made her a little nervous.  But when he barely saw his new companion, he wondered whether he had adopted the wrong cat.

He called JAR to discuss the situation.  They persuaded him to give Cleo a little more time to adjust.  Sure enough, within a couple of days, Cleo came out of hiding.  All of a sudden she started kissing Steve and wanted to cuddle with him. Steve had done a lot of reading about cats and knew that if a cat comes to you for affection, they consider you part of their family.

Through all his years of having cats, Steve also observed how, in general, black cats seemed to be especially intelligent.  Cleo, in her wisdom, took a little time to scope out her new environment, and when ready, declared “she was home!”
Life was good for Steve and Cleo on the float home until Steve’s health issues worsened to the point that he knew he had to be closer to medical care.  With some reluctance, he and Cleo moved to Juneau in December of 2018.  It took some adjusting for both of them, but with each other for company, they have both adapted.

Steve reports that Cleo is still pretty independent and shy.  She is definitely a one- person cat and shies away from visitors.  Given his health issues, this trait is of concern to Steve, and he worries about what might happen to Cleo if she outlives him.  Steve knows it is important to plan ahead for those you love and has already made arrangements for Cleo should she need another home.  In short, a friend of his from Gustavus has agreed to get Cleo on a plane to fly to Washington, where Steve’s brother will give her a home for as long as she lives.
​
For now, Steve and Cleo enjoy their life in Juneau.  Even in Elfin Cove, Cleo was always an inside cat, so the transition hasn’t been too hard for her.  Cleo still loves sitting at the window and watching the world go by.  Last year, he and Cleo went back to Elfin Cove for a short visit, and he reports that “Cleo loved it!”

Other than her companionship, Steve’s favorite things about Cleo are her memorable bright eyes, white whiskers and her black shiny coat.  She is definitively a good-looker and seems much younger than her biological age.  Steve says she is also a “talker” and will complain if she doesn’t like something.  She wants to be fed at a certain time, and if Steve is still in bed, she certainly lets him know it’s time to get up.  She doesn’t like to be picked up or held in his lap, but will snuggle next to him at night.  Steve says Cleo also seems to like music, especially country western and Cajun.
His advice to others considering adoption is to visit the shelter at least a couple of times.  Meet all the cats and learn what you can about their history.  Taking time to make sure the right cat “chooses” you can make all the difference.  Cleo has certainly made a difference in Steve’s life.  One of his friends observed how depressed Steve was after his cat Sinbad died and how much happier he became after adopting Cleo.  As she says to Cleo, “You are such a sweetie-- you've saved Steve's life!”
​
“I love cats because I love my home,
And little by little
They become its visible soul.”—Jean Cocteau